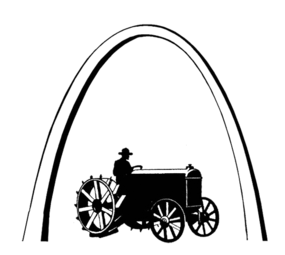 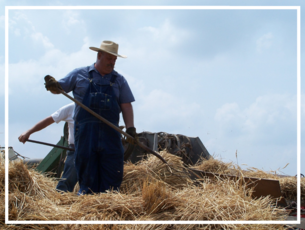 The American Farm Heritage Museum was one man's dream. The Museum became a reality when a group of men, mostly farmers, sitting in coffee shop, talked about the dream of building a museum to preserve the farm heritage. Sixty farmers, collectors, and civic leaders held a meeting to share their ideas with the public in April of 2002. It was agreed that Bond County, being near the middle of the state and right along 1-70, would be the perfect place. Meetings were conducted, fundraisers were held, and ideas were passed around. In 2002 the land for the museum was acquired and a name for the museum was chosen.

The American Farm Heritage Museum would sit on seventeen acres, along the south side of interstate 70, just east of the Route 127 overpass. Its goal would be to promote and share the heritage of America's rural life: living, farming and travel. One very generous family purchased the land and leased it for ninety-nine years to the American Farm Heritage Museum, NFP organization. After a year of planning, the first 32'x64' building, with a gambrel roof, was completed. It was finished just days before the first Heritage Days Show in July 2004. This building, originally was to be a tractor maintenance shop, but later became known as the Lil' Red Barn Museum.

In the winter of 2005, owners of a truck terminal building in St. Louis gave the building to the Museum, if we took it down. Several members went to work and got the 200'x100' building moved and rebuilt. Since then other buildings and groups have been added to the show grounds.

We are growing with each passing year. Our Main building is the site of numerous events throughout the year. The Lil' Red Barn is a little piece of history, with collections of items from the past. In 2009 this building received the Illinois Governor's Home Town Award. The Tractor Shed displays different makes of tractors and tools of the past. Our Christmas building, which operates as a work shop and houses all the Christmas boxes for The Christmas Lights Wonderland, partners with The Lil' Red Barn, Railroad, Hill's Fort and the Armed Forces Museum to put on a spectacular Christmas display.

The American Heritage Railroad, established in 2003 is a division of the American Farm Heritage Museum. Many rail­enthusiast members realized as farms were connected by the American Railroad so should the Museum have an operating railroad for its historic value, as well as provide a fun ride for visitors. May 10, 2005 the railroad division was officially formed and an intensive search began to procure equipment. Many thousands of hours of volunteer labor, by friends of the railroad, have resulted in over a mile of 13" gauge track being laid, on the grounds. It is our desire to honor the great railroads that have served Bond County, such as the Vandalia, Nickel Plate, Pennsylvania and CB & Q. In 2005 the Ben Winter's Museum railroad was purchased which provided a G-15 diesel train set. The final move of the Ben Winter's railroad was completed in November, in three days with 20 volunteers, 9 trailers and one semi-truck. The collection has grown to include both diesel and steam engines and a variety of rolling stock. The railroad owns three steam locomotives. It is hoped the 1926 Wagner 4-4-2 steam engine will be ready for operation for the 2015 season.

2005 Hill's Fort also joined the Museum. Hill's Fort played an important part in the opening of Northwest Territory. Hill's Fort may have started as early as 1806 when early settlers first arrived. The Fort's location appears on an 1808 survey map by Capt. Isaac Hill, leader of a team commissioned by President Thomas Jefferson to survey the Illinois Territory. The Legislature fixed Hill's Fort as the temporary county seat. Earliest records are preserved from Hill's Fort and include court and marriage dockets. The Bond County seat was later moved to Perrysville and, in 1821 to Greenville, Illinois. No longer useful as a fort or county seat, Hill's Fort was abandoned and fell to ruin.

Following excruciating study of the original site, a replica of the Fort has been recreated on the grounds of the Farm Museum. It is open to the public on the 1st Saturday of the month from May through October and also open, for tours and special occasions. At Christmas time they are open Friday and Saturday nights for the Christmas lights. They dress in period dress and cook over the open fireplace in the cabin, and are eager to answer questions.

In 2012 The Armed Forces Museum, "Memories of Steel", joined our Museum. It maintains as its sole mission, to preserve these important pieces of military history. The Museum houses one of the largest collections of military vehicles in the County. It currently watches over approximately 15 privately-owned and 25 museum-owned vehicles. The members are involved in a program called "Living history" which furnishes displays of t1istoric vehicles and memorabilia and, works with re-enactors at civil events like Armed Forces Day and Veterans Day. Each of these vehicles has an historic story and plays a very important role in connecting us with the soldiers who lived and died in their service to the country.